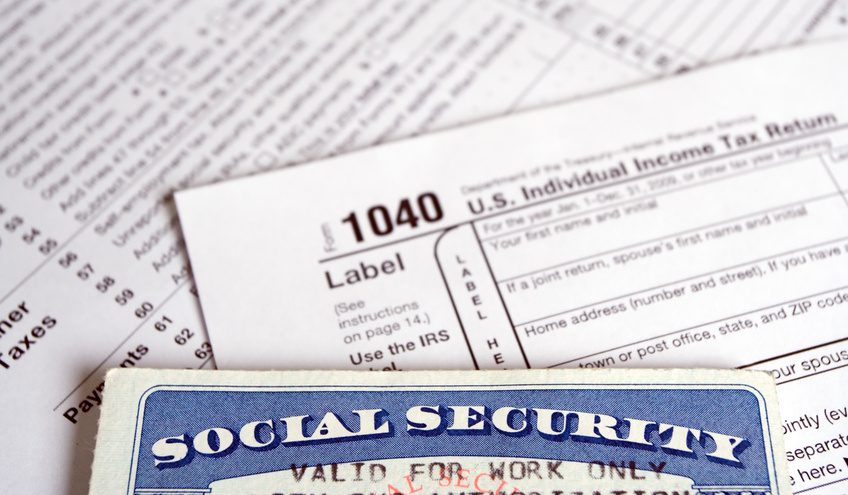 It would be nice to think that, once you retire and no longer are “bringing home the bacon,” worrying about paying taxes would be a thing of the past. But that is not the way Uncle Sam works.

In fact, unanticipated taxes in retirement can disrupt an otherwise well-crafted retirement plan. Perhaps it’s not surprising as to why financial professionals call this situation a “tax time bomb.” For this reason, it’s important to consider the impact of taxes when preparing your retirement plan, so you can make well-informed choices ahead of time and budget for taxes as part of your retirement expenses.

What you will pay in taxes during retirement is unique to you and to the make-up of your retirement income sources. But one thing that seems to be universal can be this: how big a tax bite that retirees may face.

Study Finds Taxes as… the Biggest Expense in Retirement?

Lincoln Financial Group sponsored a survey of affluent retirees, people ages 62 through 75 with annual household incomes greater than $100,000. The surveyers found that federal income taxes were their largest expense. Overall, taxes were the retirees’ largest spending item. The survey results, released in 2010 and still regarded as a telling indicator today, show that 1 of every 3 dollars a retiree spent went to taxes.

“Taxes represent the greatest expense incurred by this group,” the survey reported. “They are greater than many individuals planned for prior to retirement—and a growing source of concern.” 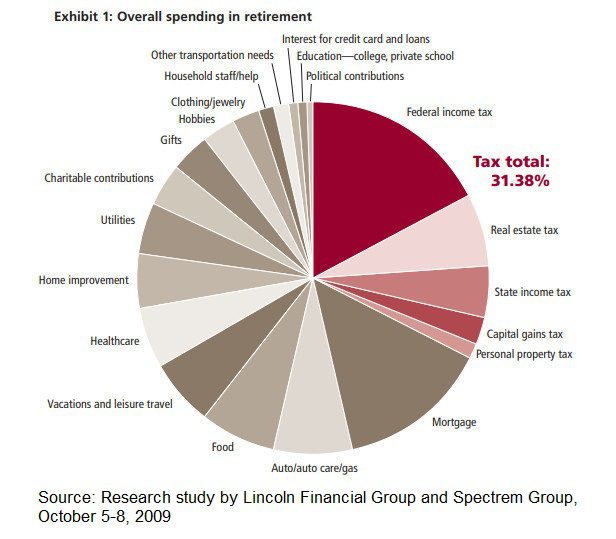 To give us perspective on future tax rates, we can begin by looking at the new inflation-adjusted tax brackets for household incomes for 2018:

What Retirement Income is Taxed?

While every person’s income—and therefore tax—situation in retirement is different, there are some common threads. Potential tax obligations may include income taxes on retirement account distributions, taxability of investment gains, and potential taxes on Social Security benefits.

Withdrawals from tax-deferred vehicles like IRAs, 401(k), 403(b), and 457 plans will get reported on your tax return as taxable income. Because they are funded with after-tax money, most Roth IRA withdrawals, if done correctly, will be tax-free. Of course, certain requirements must be met. One rule is that you must have owned a Roth IRA for at least 5 years in order to withdraw earnings on a tax-free basis in retirement.

In general, retirement accounts generally come with an early withdrawal penalty. Withdrawing funds from a retirement account or plan before age 59.5 may incur a 10% penalty by the IRS. Income taxes may be due on the withdrawal balance as well. It’s prudent to consult with your financial professional about any potential decisions relating to this.

Most pension accounts were funded with pre-tax income. The amount of your annual pension income will be included on your tax return as taxable income each year. You can request that taxes be withheld directly from your pension check. If, by chance, you did contribute after-tax dollars to your pension, the IRS says that your pension payments may be partially taxable.

The tax implications for annuity distributions vary. It depends on the type of annuity contract someone owns and how it is owned. For example, whether the annuity was started with qualified (pre-tax) dollars or non-qualified (after-tax) dollars will determine how much annuity payments might be taxable.

Just like how it generally applies to retirement accounts, a 10% IRS penalty may apply to withdrawals from an annuity contract before 59.5. It’s prudent to consult with your financial or retirement advisor so you can clearly determine the taxable status of each of your annuity policies.

As anticipated, any dividends, interest income, or capital gains will be taxed, just as they were before retirement. If you routinely sell investments to generate retirement income, each transaction carries long-term or short-term capital gain (or loss) implications.

Investigating the consequences of these transactions, as well as learning options for managing your capital gains and losses, is key before it becomes time to pay the piper in retirement.

It might surprise you to learn that each year Uncle Sam collects a share of your Social Security benefits through income taxes. You may have to pay taxes on as much as 50%-85% of your benefits, depending on how much income you report to the IRS.

How Much of Your Social Security Benefits Could be Taxable?

If you have planned well and have means when you retire, you are likely to be above the “combined income” thresholds. What the IRS looks at to determine the taxable status of your Social Security benefits is your provisional income. Let’s get more into that now.

And if you are married and file a separate tax return, you probably will pay taxes on your benefits, according to the Social Security Benefits Planner web page.

Use our “Find a Financial Professional” section to connect with someone directly. And if you have need of a personal referral, call us at 877.476.9723.