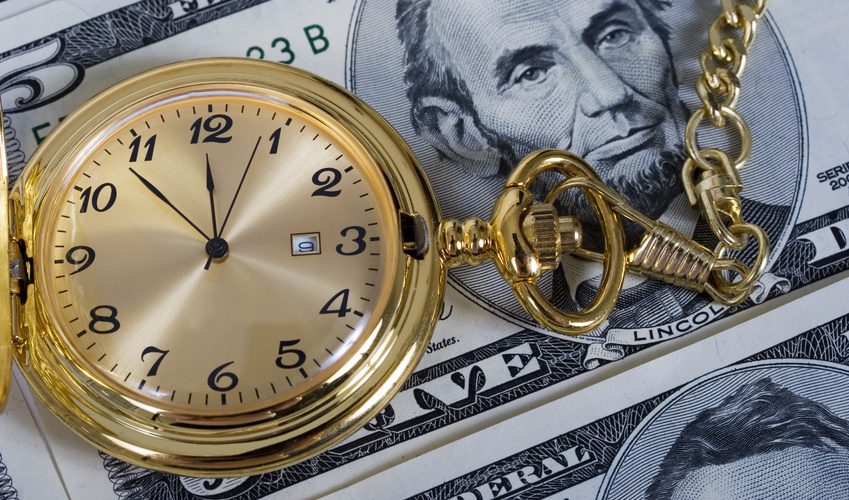 Once upon a time, pensions were a staple of the U.S. retirement system. But in the last 20 years there has been a seismic shift in the way employees fund their retirement. In 1998, an estimated 50% of current Fortune 500 companies still offered their salaried employees a pension, or also known as a defined benefit plan. Today that number sits at just 5%.

With this type of plan, a company makes regular contributions to their pension fund and then provides monthly payments or “partial paychecks” to retired employees throughout their retirement. In that sense, pensions give retirees a source of ‘guaranteed income.’

Working tenures in previous decades generally lasted much longer than they do now in our current highly-mobile, job-hopping workplace. You could be with the same employer for 20 or more years, with your defined-benefit pension accruing value over your career. Pensions were often a main motivation for people to stay with the same employer. After investing your work life with that company, you were financially rewarded in retirement.

At retirement, the pension would give the financial comfort of knowing where your money was coming from, month to month, from guaranteed monthly paychecks coming in the mail. For years, the U.S. retirement system was built on this foundation. Then, bit by bit, employer pension circumstances gradually began to change.

Company pensions started to dwindle in number, and while today’s continuing shrinkage in pension plans can be attributed to many factors, one well-respected economist points out the effects of recent economic events.

Among other economic and historical variables, the dot-com crash of 2000 is credited with helping to change the course of retirement funding.

Writing in the Harvard Business Review, Robert C. Merton, Distinguished Professor of Finance, MIT Sloan School, and a Nobel Laureate, explains it best: “Interest rates and stock prices both plummeted, which meant that the value of pension liabilities rose while the value of the assets held to meet them fell. A number of major firms in weak industries, notably steel and airlines, went bankrupt in large measure because of their inability to meet their obligations under defined-benefit pension plans.”

The result, he adds, was an acceleration of America’s shift away from defined-benefit (DB) pensions toward defined-contribution (DC) retirement plans, which transfer the investment risk from the company to the employee.

Global advisory firm Willis Towers Watson, which conducted the survey of the Fortune 500 companies, found that employees who were already part of a defined-benefit plan faced further financial consequences in the wake of the Great Recession.

In the aftermath, total defined-benefit pension plans offered by Fortune 500 companies declined, while defined-contribution plans offered increased in number. These trends can be seen in this graph below. 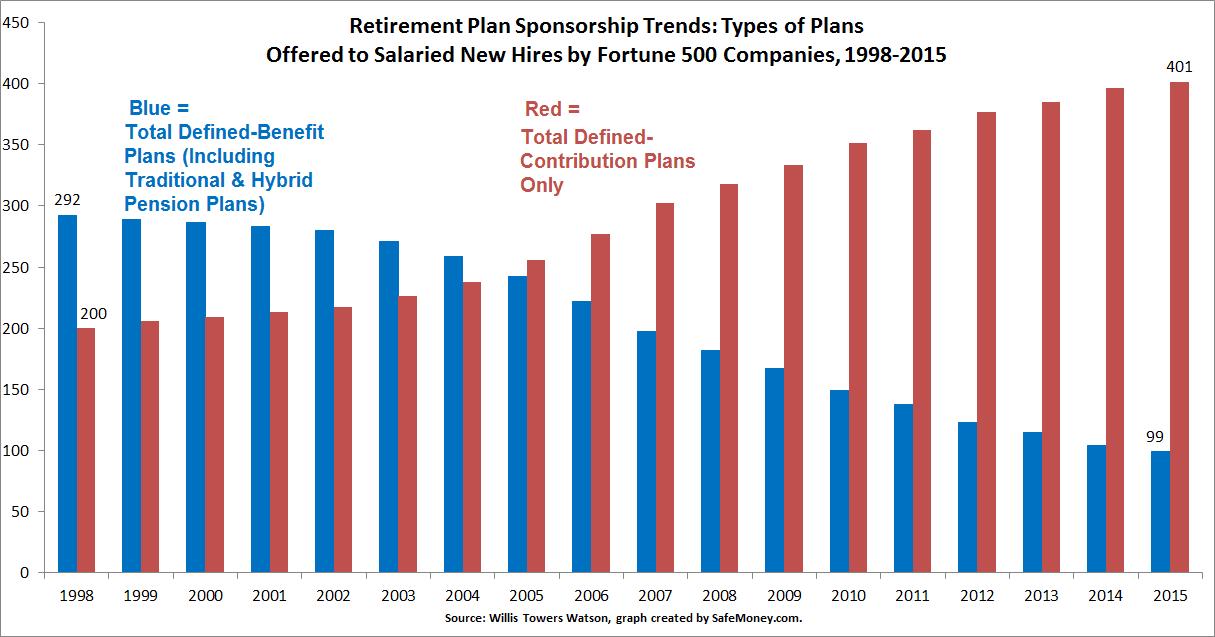 The research from Willis Towers Watson revealed there has been “an uptick in plan freezes and closings since the 2008 financial crisis. In 2009, 21% of these employers sponsored frozen pensions, and the same percentage had closed their primary DB plan to new entrants.”

Willis Towers Watson continues: “By 2015, 39% of sponsors had frozen a DB plan, and 24% had stopped offering their primary DB plan to new hires. The recent uptick in freezes has been among plans that were already closed to new hires.”

We can see how pension plans were affected — whether remaining open, closed, frozen, or terminated — in the graph below.

The rise of the 401(k) put employees in charge of contributing pre-tax funds to their retirement accounts —and determining how that money is allocated within their portfolios. The shift from defined-benefit plans to defined-contribution plans is shown below. 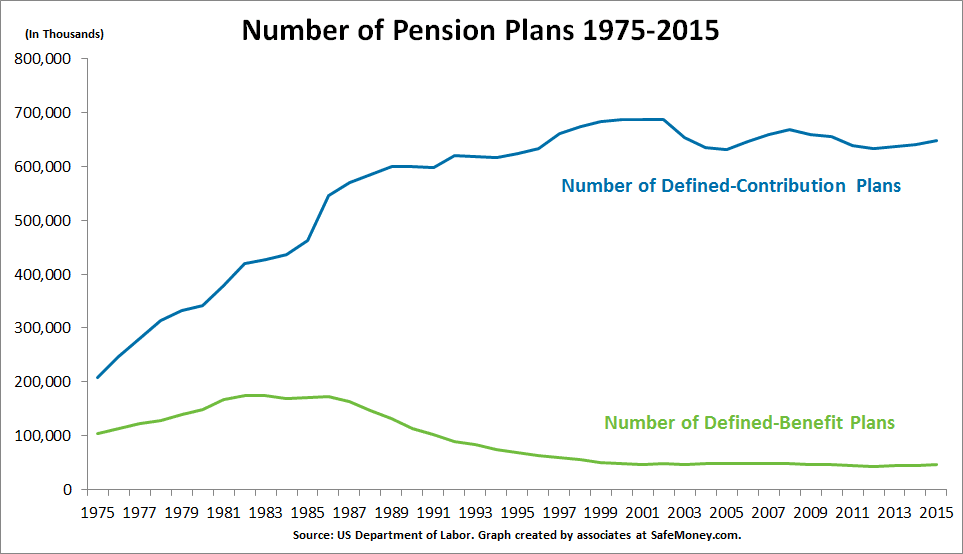 In his Harvard Business Review article, Merton, also a Harvard University Professor Emeritus, sounds an alarm: “Although the move to defined-contribution plans arguably reduces the liabilities of business, it has, if anything, increased the likelihood of a major crisis down the line as the baby boomers retire. To begin with, putting relatively complex investment decisions in the hands of individuals with little or no financial expertise is problematic.”

With defined-benefit plans, American workers knew what to expect as retirement income. They didn’t express their nest egg as a dollar figure, but as a percentage of their final salary. In other words, they knew exactly what they would receive, such as 75% of their salary.

Merton and others feel the current system has shifted the focus from preparing streams of retirement income to workers trying to score the highest return on investment to build their funds. “Investment decisions are now focused on the value of the funds, the returns on investment they deliver, and how volatile those returns are,” Merton says.

“Yet the primary concern of the saver remains what it always has been: Will I have sufficient income in retirement to live comfortably? Clearly, the risk and return variables that now drive investment decisions are not being measured in units that correspond to savers’ retirement goals and their likelihood of meeting them. Thus, it cannot be said that savers’ funds are being well managed.”

Many people planning for retirement are still desire a secure, dependable, permanent income they can’t outlive. Now that traditional defined benefit plans are winding down, lots of retirees and working-age adults are looking for alternative sources of guaranteed income. There are a number of sources that you can investigate for guaranteed income: annuities, reverse mortgages, bond ladders, and in particular, something that most everyone is likely to get: income payments from Social Security.

Because annuities are structured as “money for life” contracts, let’s talk a little more about what they might offer. In 2017, annuity sales totaled a substantial $203.5 billion, according to LIMRA Secure Retirement Institute statistics.

An annuity is an insurance product that is essentially a contract between you and an insurance carrier. You pay a lump sum or make a series of payments to the insurance company and, in exchange, the company provides you with regular payouts at some point in the future to serve as a steady stream of income during retirement.

What Annuities are Available?

There are different types of annuities and many customizations you can make to them to ensure they fit your particular needs.

While the move toward 401(k)s shifted the risk to the employee who now has to make their own investment choices, annuities transfer that risk to the insurance companies. These financial institutions are well-situated to handle the risk because of the way they carry and diversify risk across many policyholders.

With people living longer, spending more, and facing new challenges, the need for guaranteed income will likely continue to grow. Studies indicate that guaranteed income can raise the prospects of a high-quality retirement. A TIAA Institute study in 2015 found that “annuitants are more likely to have experienced an increased standard of living in retirement and a lifestyle that has exceeded their pre-retirement expectations.”

Annuities are proving to be a sought-after solution to the problem of disappearing pensions. And what if you are interested in annuities potentially for your retirement income planning needs? You can check out our Annuity Insights Guidebook to learn more about them, including their pros, cons, and potential retirement roles.

If you are ready for personal guidance with working through the “what ifs” of your retirement future, financial professionals at SafeMoney.com can assist you.

Use our “Find a Financial Professional” section to connect with someone directly. They can help you answer questions about how to create guaranteed income streams from sources other than defined-benefit pensions — along with other issues pertaining to your retirement. Should you need a personal referral, call us at 877.476.9723.