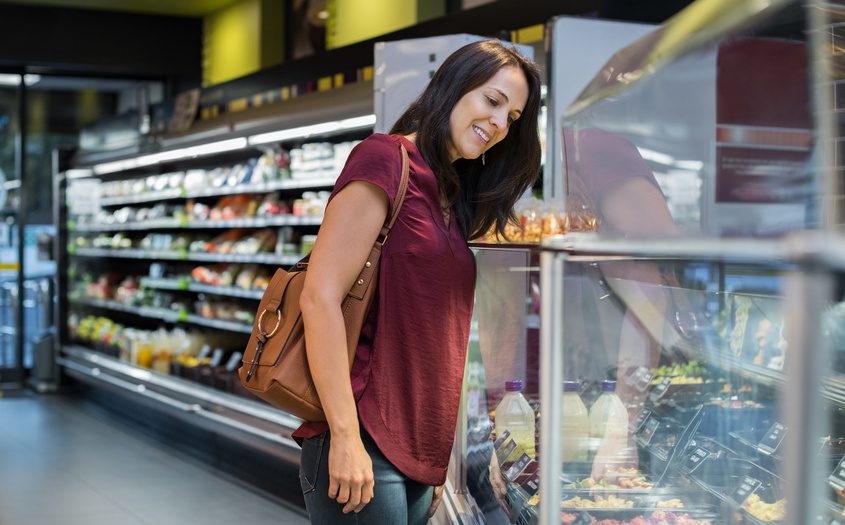 Do you know what the average retirement income is in the United States? A typical retiree household brings in $49,097 annually before taxes. The Bureau of Labor Statistics (BLS) defines retiree households as those led by someone who is 65 or older.

And what about their spending? On average, a retiree household spends roughly $49,542 per year, which is slightly more than the average retirement income mentioned earlier.

Meanwhile, the average annual pre-tax income for all U.S. households is $73,573. And as for household spending across all age groups, the BLS estimates average expenditures to be $60,060 annually.

As people live longer, due in large part to advances in healthcare and wellness, it brings up a pressing question: the uncertainty of longevity. How will you pay for all the years of retirement that you may live? 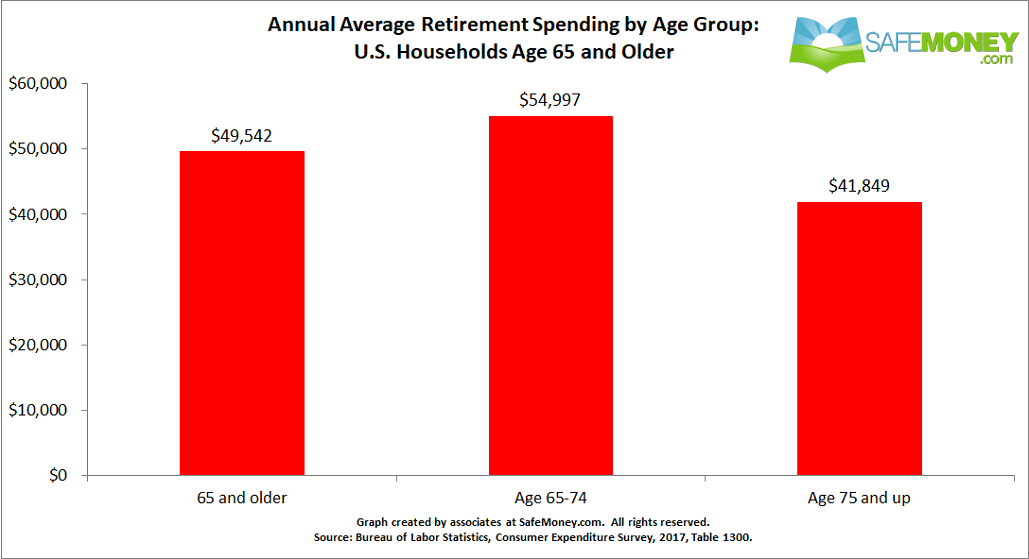 The Social Security Administration says that nearly one in every four 65-year-olds will live past 90 – and almost one in every 10 beyond 95. And there is more. Between 2010 and 2014, the number of people living to 100 or beyond rose over 40%, according to the CDC.

No surprise, but the main source of income for working-age folks is workplace wages and salary pay. However, the average retiree usually has a slowdown in cash-flow from work wages, as they wind down work hours or leave the U.S. labor force altogether. Where does their retirement income come from, then?

Here’s a look at what income streams a typical retiree may tap, which can be helpful as you lay out your own income plan.

So, how do retired Americans pay their bills, now that the work paychecks are longer flowing in? By using a variety of income streams, it turns out.

The primary source of money for retirees is Social Security. It will pay out over $1 trillion in total benefits in 2018, as noted recently by the Social Security trustees.

Social Security payments, along with private and government pension payouts, make up the lion’s share of the average retiree income, according to the BLS. Altogether they pay out $24,673 a year. 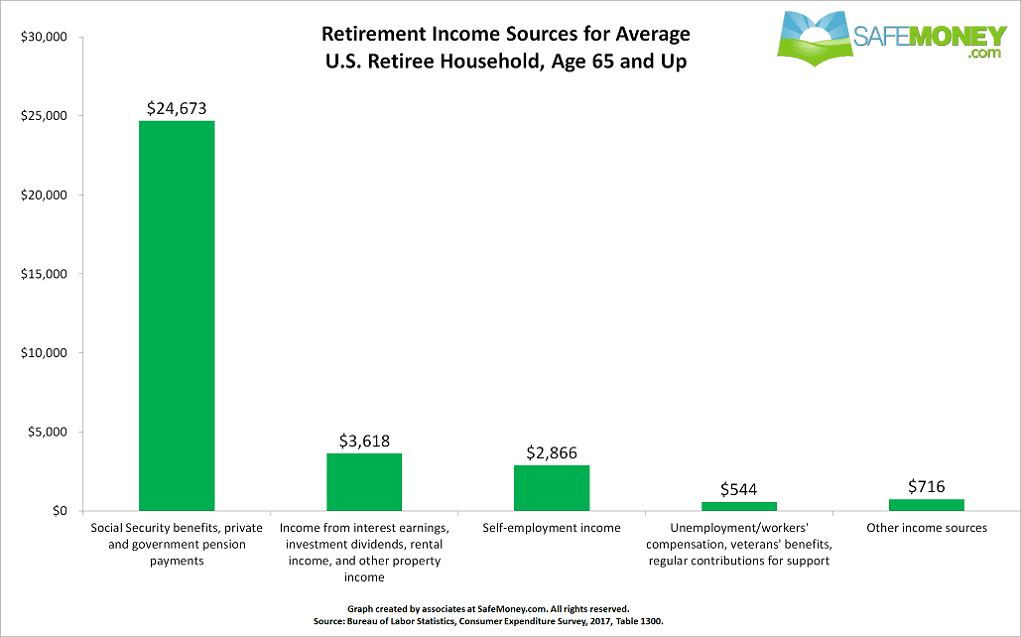 It may be surprising, but the third largest bucket of retirement income, on average, is self-employment income. Retirees take home an average of $2,866 annually from being self-employed.

And what about other pots of retirement money? According to BLS data, other top sources include unemployment or workers’ compensation, veterans’ benefits, and financial contributions received regularly for support.

Some folks may ask how these money sources differ by age. As seen in the graph below, income sources still fall in the same order. But the average amount of income from each source seems to change with increasing age. 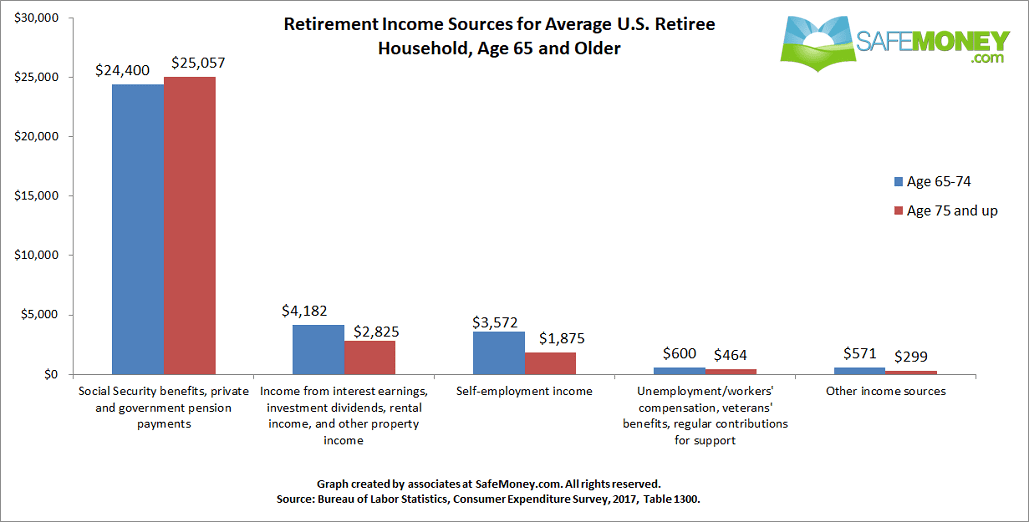 Yes, the BLS datasets provide some insight into how people are paying for retirement… But they are just averages! They might not represent the experience of higher-income retiree households, for example.

So, how are retirees paying for their monthly bills and expenses? According to a survey by Transamerica Center for Retirement Studies, these financial resources are what retirees nationwide say are their current income streams:

From there, here is what retirees said are the income streams they depend on most throughout retirement. Transamerica Center for Retirement Studies operates some of the largest and longest-running national surveys on retired and working-age Americans.

Some highlights to think about:

As they prepare for retirement, working-age Americans have certain expectations of their future. That includes what they believe will be their future income streams. But as Gallup has found, there may be a gap between what people expect for their future years and how their retirement actually turns out. 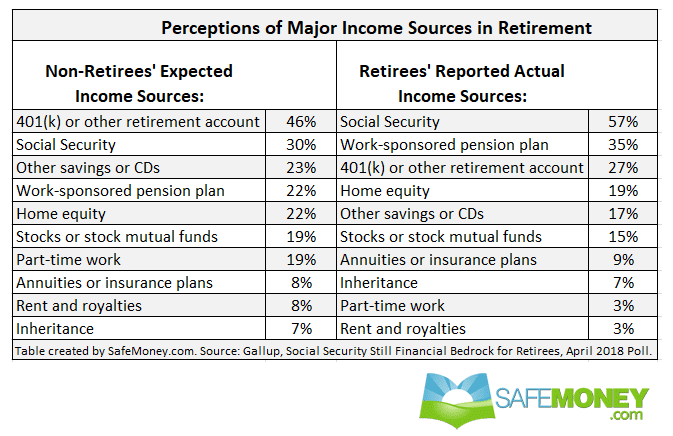 However, almost 6 in 10 retired Americans report that Social Security serves as a major income stream for them in retirement. Meanwhile, just 27% rely on a 401(k) or other retirement account as a major retirement funding source.

The other gaps between expected income sources, versus the actual sources retirees come to use, can be seen in the table above.

What about Your Retirement Income Security?

These findings can be helpful for envisioning what your income mix may look like. But everyone’s numbers are different. The best income planning approach is using your personal income, cash-flow, investments, and savings numbers to see where you are — and where you can be.

If you believe you could do more — whether you are still working, on the cusp of retirement, or in your early retired years — you may be able to benefit from a second opinion of your existing income plan. Here are some questions to consider.

These questions and others are what a financial professional can help you answer with confidence. You may consider working with an independent financial professional. Unlike agents or advisors with captive firms, they can shop around from many companies for potential solutions. Being independent allows them to have a wider shelf of products to work with, and they may be able to offer you a wider assortment of solutions as well.

If you believe you could benefit from the guidance of a financial professional, many are ready to help you at SafeMoney.com.