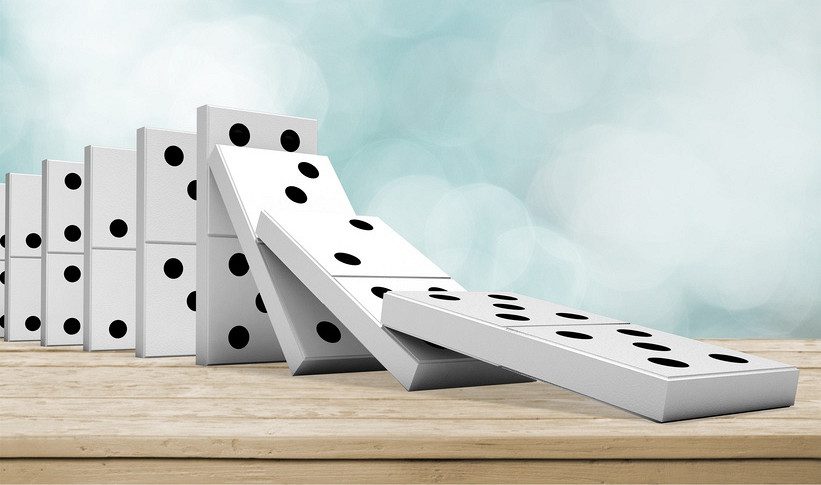 Sure, many people stress over money issues. From mortgage payments and other bills to household spending and transportation costs, more than a few financial stressors are taking a toll. But retirement is quite different from the earlier stages of life. What may be Americans’ top money stressor as they venture into their retirement years?

According to a recent survey by Allianz Life, a top economic worry is inflation. Nearly one-third, or 32% of Americans said that they are “panicked” or “very worried” about inflation and its effects on their retirement.

It’s good that retirement investors are aware of inflation, but many underestimate it as a significant risk. In the survey, 64% said they don’t have a plan to address inflation. Among the 36% who do, 51% indicated “being more frugal with their money” would be their plan of action. And what about when it comes to actual planning? The Society of Actuaries reports that 45% of retirees and 28% of pre-retirees neglect inflation in their retirement plans.

Because inflation can be a real dealbreaker for retirement lifestyle – especially as lifespans increase – here’s a look at the power-punch that inflation can land over time.

What are Some Other Findings?

In the survey, people mentioned several ways they worried that inflation can affect their financial lives. These concerns varied, from having the ability to cover healthcare costs to being able to travel, as the graph below shows.

While concerns about inflation were clear, the survey indicated many Americans have a misunderstanding of inflation and how to address it. Overall, people overestimated typical cost-of-living increases in retirement. Those surveyed predicted an average 4.4% increase in the cost of living each year. And some respondents gave even higher annual predictions as to what they expected for inflation in retirement.

Despite these predictions, Allianz Life estimates average inflation over the last 20 years to be just 2.15%. From 1999-2016, annual inflation hovered in a range of 0.1%-4.1%. The graph below shows how costs increased each year during that timespan. 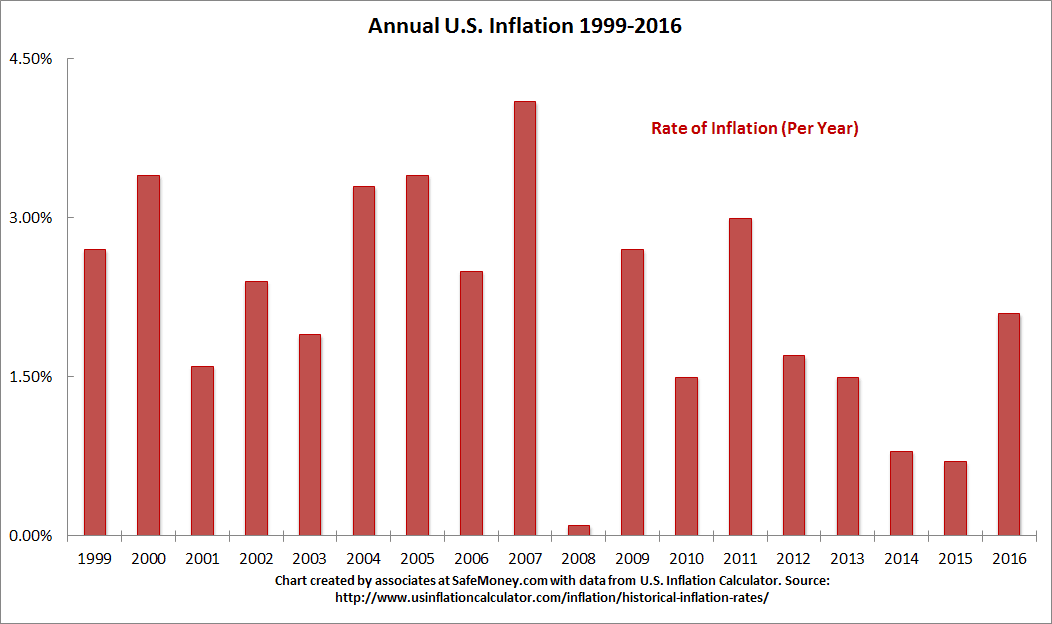 Sure, annual inflation has remained relatively low over the past couple decades. But it’s important to note that federal statistics-gathering entities don’t account for price movements in energy and food products in the consumer price index, or the index used to calculate annual cost-of-living increases. Events such as the climate conditions, price controls, government market interventions, geopolitics, and other influencers make these sectors more vulnerable to “shocks” than other sectors included in the CPI. That’s one reason why they are not included, and it’s important to acknowledge that food and energy goods may be subject to more fluctuations in price movements.

Another important point. Because inflation has remained low, it’s easy to overestimate how the effects that it can have on your money over time. But as we shall see, the long-term impact of inflation can be anything but insubstantial. Having a solid, well-thought-out long-term financial strategy to “guard” against its effects is essential.

Like everything, inflation adds up over time. To put this into perspective, it may help to think it over for a moment. Did the last car you purchased cost more than the first home you purchased years ago? That could be one potential illustration of the long-term impact of cost-of-living increases. With that said, mull over these numbers for a second:

Then in January 2016, the average monthly Social Security paycheck was $1,341, according to research firm LIMRA. Assuming we had a fixed income and at the start, expenses matched income, over a 20-year period living costs would greatly outpace Social Security payments. These trends can be seen for 1%, 2%, 2.5%, and 3% inflation trajectories below. 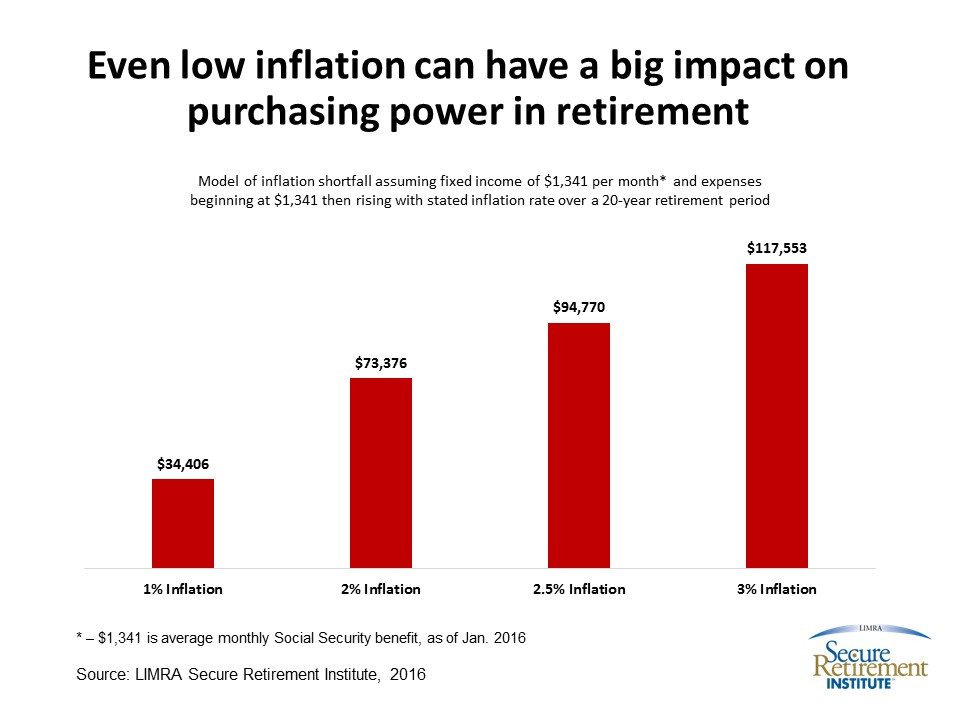 While these give a snapshot of what inflation can do to money’s buying power over time, no discussion of inflation would be complete without going over healthcare costs.

According to HealthView Services, retiree healthcare expenses will rise an average of 5.47% annually for the foreseeable future. That’s almost 300% greater than U.S. inflation from 2012-2016, which was an inflation rate of 1.9%, and over 200% greater than annual expected cost-of-living adjustments to Social Security payments (projected to be 2.6%).

The biggest driver of this rapid rise in costs is due to retirement healthcare inflation, says HealthView. An average 65-year-old couple retiring in 2017 will pay $11,369 in projected costs for healthcare in their first year of retirement. By the time they reach age 85, they are projected to be paying $39,208 in annual health costs, including payments for Medicare Parts B and D, supplemental insurance, dental insurance, and out-of-pocket expenses. Their total overall retirement lifetime healthcare expenses is expected to be $607,662, with annual inflation factored in.

Projected annual healthcare costs for the retiring couple at different ages are, according to HealthView:

Some other sources don’t peg total retirement healthcare expenses at this high, but they are still substantial. In recent times, Fidelity has reported total healthcare cost projections of $275,000 — a $15,000 increase from its estimates in 2016. Regardless of these projections, all of these statistics underscore the prudence and value of creating a long-term strategy to manage inflation, other risks, and income in retirement.

Ready to Prepare for Your Financial Future?

When you are ready to plan for inflation and other risks — and create a dependable strategy you can rely on — financial professionals at SafeMoney.com stand ready to help you.

Use our “Find a Financial Professional” section to connect with someone directly and get your conversation about your needs and goals started. And if you need a personal referral, call us at 877.476.9723.