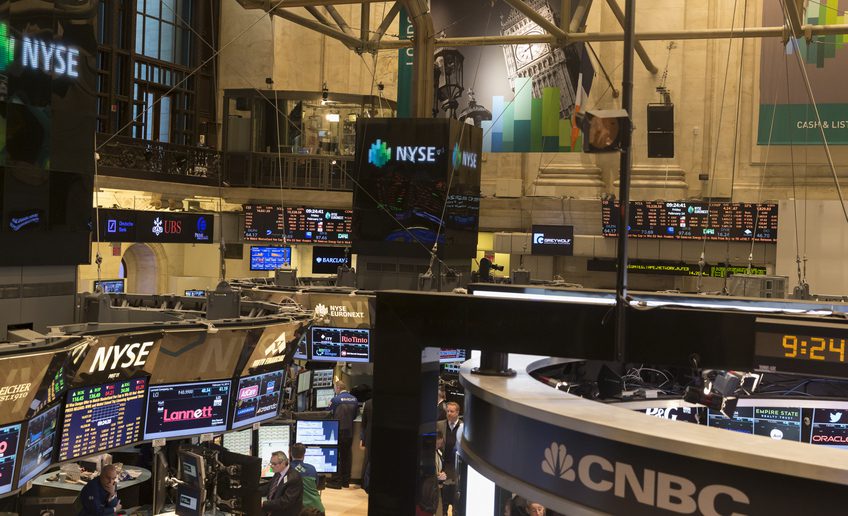 Sometimes the stock market can go through a rough patch. The market takes a dive, and then the near-term outlook for stocks might not be that rosy. During those times, many people go on the hunt for ways to keep their money safe.

For millions of Americans, one answer is fixed-type annuities. If you are considering annuities as a place of refuge, then this next question couldn’t be more important for you.

If you had money in a fixed annuity or a fixed index annuity and the market dropped, how much money would you lose? The answer, of course, is not even a cent due to the market falling.

One of the benefits of fixed and index annuities is their guarantee of principal protection. When you put money into a fixed index annuity, the insurance company pledges to keep your money protected from falling index values. The financial safety nets that it maintains to protect your money are indeed very strong.

Even if the market sees a swing like it did in the early 2000s or in 2008, it wouldn’t matter. Your money will stay intact inside your annuity contract.

Protect and Grow Your Money During a Bear Market

One instrument that can benefit retirement savers in a bear market is a fixed index annuity. Not only do they offer principal protection and do well in down-market periods. They also aren’t as assailable by the effects of the Fed cutting rates as are fixed annuities.

Another nice feature of fixed index annuities is their growth potential. Your money can earn more interest than just the fixed interest rate than you would receive with a traditional fixed annuity.

A fixed index annuity is always linked to an underlying financial benchmark, like the S&P 500 price index. When the index goes up, your annuity earns interest based on a portion of that growth. And when it goes down, the insurance company simply credits zero to your money for that period.

So you will never earn negative interest with a fixed index annuity due to falling index values. Even if a market index had a -50% change, your money would still be intact.

Best of all, the initial amount of money you put into the annuity, and the money you earned from credited interest in prior periods, are locked in. So your principal and earned-interest money remain the same in the down-index periods!

How Can the Life Insurer Keep My Money Safe Like This?

It’s done through how the life insurance company secures your annuity dollars.

The insurance company also puts the bulk of your index annuity premiums into low-risk, conservative investment holdings. These holdings are often Treasury securities and high-quality corporate bonds. Insurers put over 90 cents of every dollar into these low-risk interest-earning assets.

Something like 3 to 5 cents of every index annuity premium dollar are put into call options on the underlying benchmark index. This is how the insurance company offers you the growth potential of the index, but still manages its risk for downside exposure.

How Does a Fixed Index Annuity Earn Interest?

You have a variety of options when it comes to how you choose for your contract value to grow. Every fixed index annuity comes with a menu of “buckets” that credit interest based on different timespans. These are called “interest-crediting strategies.”

Some strategies will credit interest to your money based on the monthly average movements of the index. Other strategies are longer and more popular. They credit interest based on a starting point and an end point on the index over a year. Some go for even longer than a year.

Most annuity policyholders choose the “annual point-to-point” strategy, where interest is credited on an annual basis as described above.

In all cases, if the index registers a negative change for that period — whether it’s -0.4% or -40% — your principal and interest earnings are locked in. They won’t change in value. 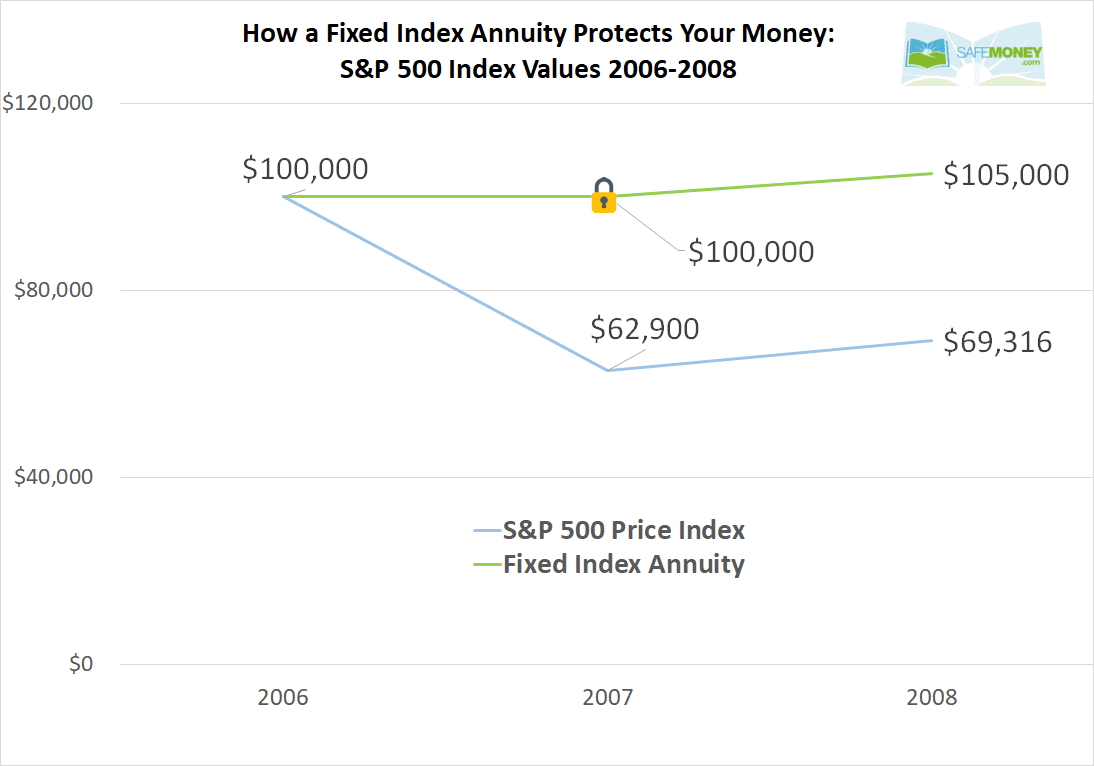 Variable annuities, buffer annuities, stocks, mutual funds, and many other types of financial instruments simply don’t offer this floor of protection like fixed index annuities and fixed annuities do.

On the flip-side, the insurance company has some control over the index annuity’s growth potential, in exchange for this rock-solid protection. The life insurer can limit your growth potential with caps, participation rates, and spreads.

Be sure to ask your financial professional for any limits on growth potential that might be in the fixed index annuity contracts you are considering.

How Often Do Insurance Companies Go Under?

The short answer is, not very often at all. You would think that in the bad economic times of the 2000s and the Great Recession, quite a few insurance companies would have gone under.

But historical data shows that the steady reserves and other requirements of insurance companies create quite the safety net. From 1982 to 2010, the average insurance company failure rate was roughly 0.5%, according to a study by Stephen Robb, Paul Della Penna, and Alicia Robb. 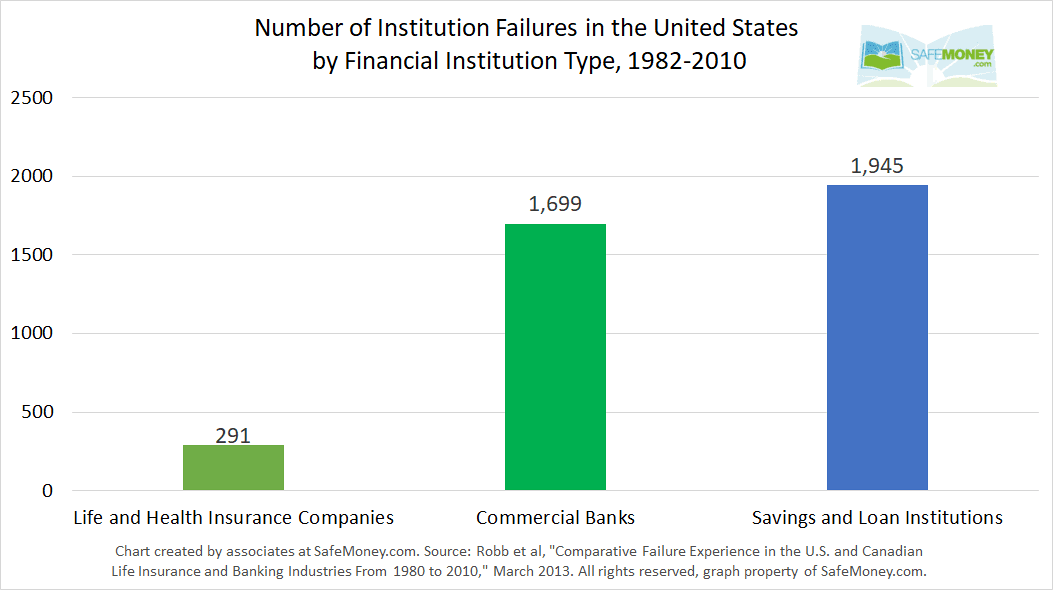 In contrast, during the timespan from 1980 to 2010 there were 1,985 failures of savings & loan institutions in the United States.

It’s noteworthy, considering how our interconnected global economy can swiftly bring changes felt across the world.

As the study researchers note, these changes can go from one market across the globe to another stock market in mere minutes. In their report, the researchers write:

“Over the last several decades, the economies of the world have become more closely linked. We are now in an era where money market funds in the United States include assets from many other countries, and ‘credit events’ that occur in one part of the world are reflected in the U.S. investment markets within minutes.”

“A default in a security in Europe can have an immediate impact on the retirement savings of millions of people, including many in the United States. Subprime mortgages that defaulted in the recent U.S. financial crisis rapidly affected entities throughout the developed world, as investors everywhere had exposure to that market through the practice of securitization.”

Of course, it should be noted that the financial strength rating of the carrier can come into play in some instances.

If you buy an annuity contract with a carrier with a financial strength rating below BBB, then the odds of the carrier becoming insolvent are much higher. If your annuity contract is with an A rated carrier, then you can probably rest easy.

It should also be noted that if an insurance company fails, then reinsurance and other safety measures would kick in to cover the losses of the company up to a very high amount.

What if you happen to own a fixed or fixed indexed annuity with a company that becomes insolvent? Then you could reasonably expect the solvency companies to refund your money up to at least $250,000 depending upon the state you live in.

However, each state comes with different coverage levels, which you can check and learn more about here on the NOLHGA website. It can also take a while for them to disperse the funds.

See How You Can Reach More Financial Peace of Mind

Consult your financial advisor for more information on the financial stability of insurance companies and how this can affect you. Chances are that your money is very safe in a fixed-type annuity.

Now, is an annuity right for you? And what about your overall retirement strategy? Are there any other steps you can take toward improving your financial situation and working toward your personal retirement goals?

You don’t have to work through these “what ifs” by yourself. Help is just a click away. Many financial professionals at SafeMoney.com stand ready to assist you.

Use our “Find a Financial Professional” section to connect with someone directly. You can schedule an initial appointment or phone conversation to discuss your goals, concerns, and situation at your convenience. Should you need a personal referral, call us at 877.476.9723.